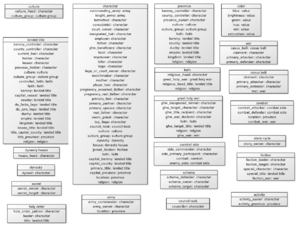 Scopes can be nested, and are usually relative to the scope from which there are called, except for the ones that are global and can be called from "Any" scope.

In Jomini, Scopes can also be chained without nesting:

We can also directly compare scopes for equality:

In CK3, the ability to save and recall scopes has been vastly simplified by the addition of the save_scope_as command, which can save a given scope under a name, to be recalled later:

Saved scopes will stay saved within the current code chain, that is, they will remain accessible until every action/event/effect/etc that is run as a result of the current one has been evaluated to completion. They will only be accessible in the given code chain. For example, if there is an event chain that takes years to complete, a scope saved in the initial event will remain accessible until the concluding event, but will not be accessible to any other events that may occur during that time frame.

Triggers and effects in scopes are only evaluated and executed if the scope exists. This can be used with always = yes to check for the existence of a scope in a trigger or for effects that you only want to execute if, for example, a character's religion has a religious head.

Note that the condition tooltips within any_ scopes are misleading and only show whether the conditions are satisfied for one specific, seemingly randomly-chosen thing contained within the scope, and thus may show that some conditions are false even when the scope itself evaluates to true. These are best overridden with a custom_tooltip.