A new feature of Crusader Kings 3 are the improved dynasties, which can be composed by a limitless number of houses. Dynasty modding gives the opportunity to create new dynasties. It's also possible to change name, coat of arms and houses of any existing dynasty.

A new dynasty is created by adding files to four folders.

The first change is applied by adding a new file example-dynasty.txt to the folder common/dynasties of the mod folder. In the file an id is assigned to the new dynasty, for example 2100001. Then lines are added for culture and name. The name line doesn't contain the name, but instead the path in the localisation file. It should look like this when finished:

The prefix only adds the "de" before the name and is already included in the original localisation files. There are several prefixes for different cultures.


The second change is made in the folder localization/german/dynasties either to a copy of the original dynasty_names_I_german.yml or an empty example_dynasty_names_german.yml. The same path applies for other languages, only the name of the file changes as well as the folder following common/localization. In this file, the real name of the dynasty is added.

To see a list of existing prefixes, see localization/english/dynasty_names_l_english.yml (or the version for your language). They are at the top of the file, starting with dynnp_.

To add a new prefix, simply add it to your customised dynasties file, or (if you have a lot), create a new file, such as dynasty_prefixes_l_english.yml.

The next change is made in common/coat_of_arms/coat_of_arms to the 90_dynasties.txt or the empty new file. Here is added the description of the coat of arms. Here any existing or new one can be pasted. The example uses the coat of arms of the county of Saarbrücken in Lotharingia.

Mottos can be added to dynasties or to houses (or both):

You will then need to localize the motto.

Finally, the founding house can be assigned in a text file in common/dynasty_houses. If you choose not to do this, the game will create a founding house using details from the dynasty.

When every step is done, the final result ingame should look like this: 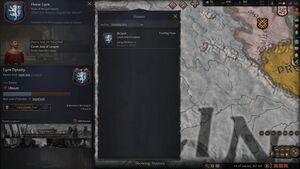