Events are the meat of every well-rounded mod; smaller and larger bits of story that can happen to a player during the campaign.

The overall structure is similar to that of a CK2 event, with some tweaks to the syntax and a whole lot of extra features, many of them optional. The barest possible event is laid out here, and each element is described individually in a later section.

There you go! Add this to your mod, trigger it from the in-game console using "event triggers [example.1]", and you have got yourself a working event! Everything else is optional, but necessary to really flesh out the events.

Namespaces can be any alphanumeric string (without the '.' character), and are used as prefix in the form <namespace>.<id>. The ID uniquely identifies your event. If an event file uses a namespace, it has to be declared at the beginning of the file with namespace = <namespace>. This has to be done for every file the namespace is used in.

These are top-level variables that determine your event's kind and appearance. They have a limited set of values. 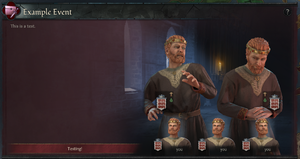 When you've selected a background, the appropriate environment is automatically selected. Only overwrite it when necessary.

This is an additional requirement for an event to work.

Runs when the trigger fails.

Explain how a description can be composed of multiple strings; with stuff like first_valid, and all the alternatives.

This is a block of effect script: it will be ran immediately as your event is triggered, before the title, description, portraits, are even evaluated let alone rendered. This block is useful for setting variables and saving scopes to use in your text or for portraits; or for functional effects that you want to happen without the player having any control over it.

Options within events are able to be pressed by the user. Each event may have any number of options, including none at all (a common example includes hidden events). Each option in defined in the main event block, like so:

The table below describes available keys within the option block:

This is a block of effect script that runs after the event has ran its course and an option has been chosen. Won't do anything if the event has no options (for hidden events, for example).

What types of widgets are there, with screenshots for each of what they look like.

此页面尚未完成
需要完善以下内容： An explanation on what on_actions are, and how and for what they are used.

Should probably become its own page.